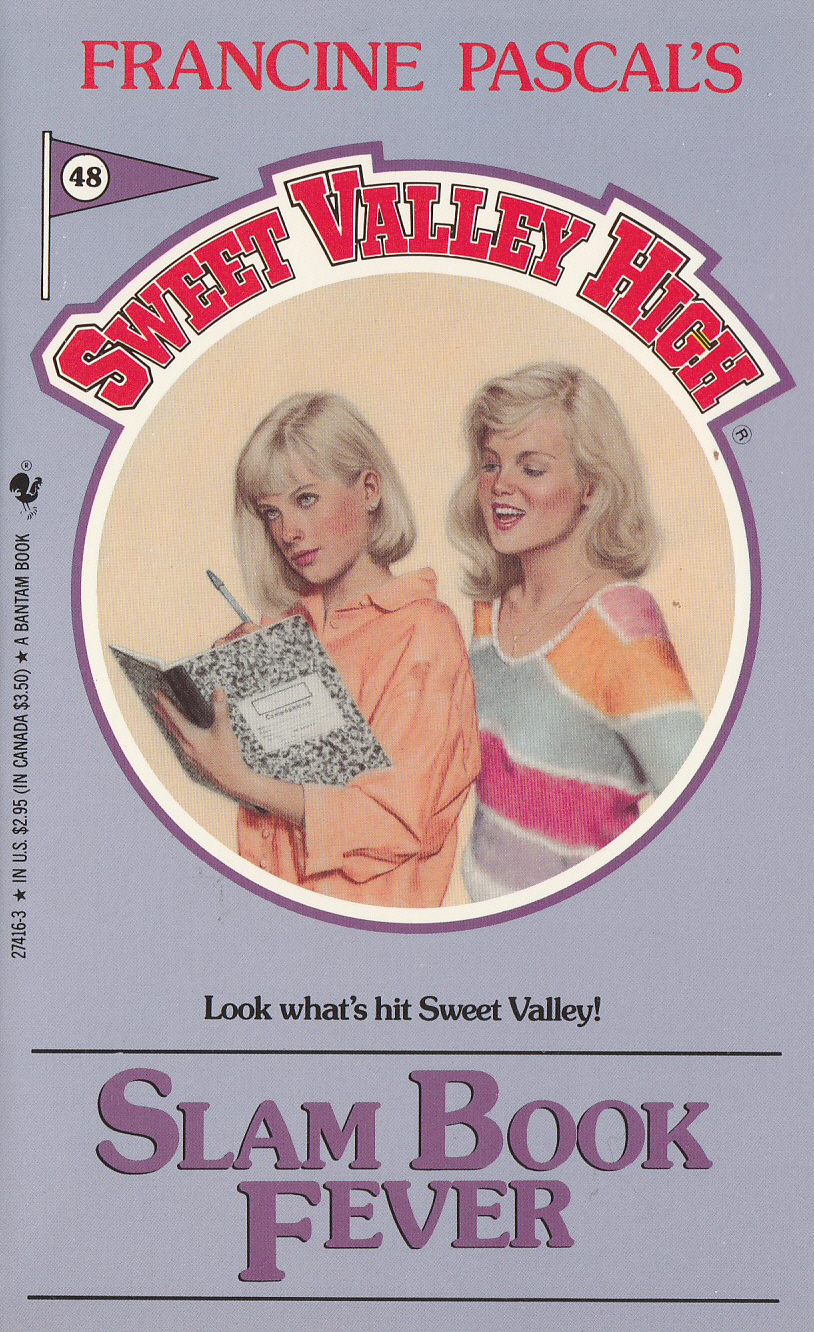 The moral of the story: Southern boys don’t like aggressive girls, so if you wanna get the guy from Atlanta, you have to act shy and quiet. The Big Deal: Party for Olivia’s literary magazine being finished

The moral of the story: Southern boys don’t like aggressive girls, so if you wanna get the guy from Atlanta, you have to act shy and quiet.

The Big Deal: Party for Olivia’s literary magazine being finished

Amy Sutton has decided Sweet Valley High needs slam books. They were all the rage at her school in Connecticut, and she thinks it’s high time Sweet Valley got with the program. She explains the concept to everyone at lunch, and everyone is all, “Yeah! I’m gonna go get my notebook right now!” But then Liz is all, “But guys, won’t someone get hurt?” and everyone boos her away from the table. Amy tells her not to worry because it’s all in good fun.

A. J. Morgan is the new guy at school and he’s the most gorgeous guy Jessica has ever seen. She’s actually flustered when she talks to him, blushing and everything. When everyone’s slam books list her as Biggest Flirt, she can’t believe it and doesn’t want A. J. to think of her that way. She decides she’s not going to be flirtatious anymore. She, Cara and Lila run into A. J. and Jessica gets all tongue-tied and doesn’t speak to him. Cara and Lila think it’s all part of her new “Not a Flirt” personality.

Olivia and Roger are having problems and they end up breaking up. Olivia and Jeffrey have been working together on a new literary magazine at school. Jeffrey’s going to do a photographic essay and take a bunch of pictures of a girl in transition from sadness to happiness. He wanted to use Liz as his model, but her face is too sunny and happy for the early shots. He thinks Olivia might work. Liz agrees with him. Then Jeffrey and Olivia start showing up in everyone’s slam books as Couple of the Future. Liz doesn’t mind until Jessica convinces her to be worried about it.

Jessica is actually really cute around A. J. She’s all uncoordinated and can’t stop blushing. At a basketball game, she screws up all the cheers and the pyramid because she can’t stop looking at A. J. Everyone is at the Dairi Burger after the game and Amy has her trusty slam book. She’s showing it to the guys and the newest entry under Couples of the Future is A. J. and Elizabeth. Jessica is horrified.

The next day, Jeffrey calls Liz and says he won’t be able to pick her up for the beach until two because he’s taking pictures of Olivia for the thing. Liz tries to keep calm, but then Cara comes over and tells her she saw Olivia with her arms around Jeffrey. Liz is pissed. She doesn’t want to be alone, so she goes to the beach with Cara and Jessica. Lila tells Liz to talk to Jeffrey and even offers to talk to him for her, but Liz isn’t having it. She just gives up and decides the relationship is over.

Liz sees A. J. playing volleyball down the beach and decides it would be fun to flirt with him to keep her mind off Jeffrey. Acting like she just woke up from a motorcycle accident-induced coma, Liz goes up to A. J. and gets to flirtin’. Everyone is looking at her like she’s nuts, except Jessica, who’s looking at her like she’s going to kill her. Jeffrey and Olivia get to the beach just as Liz is walking back to her towel. They apologize for taking so long, but Liz isn’t interested and says A. J. is about to teach her how to windsurf. She stalks off toward him and Jeffrey is upset. The girls tell him why Liz is so mad and he explains that Olivia had something in her eye and he was trying to help her and that must be what made Cara think they were making out. Lila says she’ll fix everything and even tells Jeffrey that if Liz doesn’t come crawling back in five minutes, she’ll take him out to an expensive restaurant. They all watch her try to talk to Liz, who just shakes her head and goes back to A. J. Lila is decidedly smirky when she tells Jeffrey they’ll have a strategy session over dinner that night.

Olivia goes to the Wakefields’ to talk to Liz about what happened, but only Jessica is home. Liz is out with A. J. Olivia tells Jessica she wants to find out who started pairing her with Jeffrey in the slam books. She thinks that person is the one responsible for the break up. Olivia and Jessica wrack their brains but can’t think of who would want to break them up. Uh, how about the person having dinner with Jeffrey right this very second?

A. J., who likes shy girls “like the ones back home in Atlanta,” has kind of gotten sick of Liz and her flirting. In fact, Jessica seems to be the only girl around who isn’t aggressively flirtatious. He tells her he wants to go out with her and she’s all happy about it, even though she knows she’s nothing like he thinks she is. What kind of jackass goes out with one twin and then just goes after the other?

Olivia and Jessica see Lila and Jeffrey together at school and figure out she’s probably the one who orchestrated this whole thing. But they want to be sure, so Jessica decides she’ll pretend to be Elizabeth the next day and collect everyone’s slam books and say she’s going to do a thing for “Eyes and Ears.” Because nothing’s better than a good old-fashioned and unnecessary twin switch. They find that Lila’s slam book is the only one that doesn’t have Olivia and Jeffrey listed as Couple of the Future. They bring their findings to Liz, who feels like a jerk and apologizes to Olivia for being so upset with her. Then she makes up with Jeffrey and everyone is friends again. The book drags on for a bit more while Mr. Collins throws a party to celebrate Olivia’s literary magazine being finished. A. J. and Jessica come to the party together and Jessica pretends to be interested in literature. Then Olivia and Liz make a new category in everyone’s slam books for Class Sneak. They write Lila’s name in every book as revenge for all the misery she caused over the last week. Sweet.

Elizabeth finished the juice with a slurp.

Seriously? Why do I need sentences like this in my life? Ugh.

“I can hardly sit down and say, ‘OK, Jeffrey, tell me why Cara happened to see you with your arms around Olivia today.’”

The Cover: Wow, nice sweater, Jess! I don’t know who that ugly chick is writing in the notebook. I guess it could be Amy, but I thought Amy was way prettier than that.

And then, after all that, there’s this: